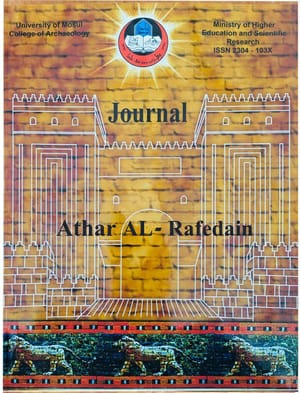 Its known that cuneiform texts written on tablets made of mud, They clean it and soak it in water thereafter they cut it according it to size and shape of the required texts. However, they used stone and marble too. But rarely used gold or silver. Mesopotamian‘s scribe invented method of writing on wooden board from Ur.III period on. By the middle of the 50teenth of last century the British archaeologist at Nimrud discovered 16 ivory boards and similar made of wood in well in the northern palace of Ashurnasirpal II. They are rectangular approx. 30x15cm. and there are lines engraved on the surface. The remaining of the wax told us how they prepare it and used. They add date syrup or honey in order to fix the wax which mixed with special mud called K/Geel ( in Iraqi‘s dialectic ṭeen – Khawa) on the board surface. Then they can write cuneiform texts or draw image or plan easily etc,,. These wooden writing board was the first invented book since they can join up to 6 board together using hinger . they also could use both side of the word. This help them to write long texts . Ivory board , probably made for the usage of the king or palace officials , but the wooden writing board used in all aspect of scientific and religious activities. Ashurbanipal library acquired hundreds of them but unfortunately no one discovered yet. The last attestation in Sippar library from the Now and late Babylonian periods.

The research, as it appears from the title, aims at shedding light on one aspect of the blatant and inappropriate behavior practiced by some members of power and influence in the Assyrian Kingdom. It is certain that by extrapolating from the terms of the Assyrian treaties and sales and analyzing their true dimensions, we seek and understand the care of the kings and their growing concern to compel the citizens of the Kingdom to have good character towards them, represented by protection, sacrifice, honesty, sincerity, advice, loyalty, respect, honesty and rejection of any ill-manners such as treachery, Conspiracies, intrigues, defamation, witchcraft, sorcery, etc. As much as the Assyrian society has enjoyed the virtues and virtues inherent in many of its members, we find that the manifestations of malaise were also prominent in many Assyrian textual evidence, especially the administrative messages, which are often embodied in the behavior of some power and influence Against the citizens of the Kingdom such as abuse and cruelty, taking bribes and assaults on the property of others and the injustice of people and mistreatment and ridicule and vice, as well as deception and cunning and greed and jealousy and defamation and meet people with two faces and deny the beautiful.

This paper deals with the different forms of the nouns, Singulars, dauls and plurals in two languages of Arabs
in(Arabic),languages. Which are Akkadian and Arabic a comparative study. This paper consists of three parts : first the rules of Singularity of the noun starting with difintion of the. Vowelc.The second deals with dulity in Arabic and Akkadian The third sheds light on plural noun in the both depending on many examples in both languages. concentrating on the changes that occurs.

The Concept of Alternative and Applications in the Assyrians

We dealt in this research the concept of alternative in the Assyrians which means replacing the thing with other, in according with this research has divided study applications alternative on two parts: the first is based on the religious concept , through a number of practices, including the practice of King alternative to maintain the integrity real king in the case predict the existence of risk on him as was placed person substitute for the real king The second is based on the practice, including the so-called alternative medicine in the use of prescriptions medical Assyrian alternative for the treatment of the same disease in the case of non-treatment the first recipe or not available, and there were a reference in many legal materials to substitute as emerged a new application and a different role which is called the principle of compensation, or provide alternative as satisfaction of offender to the people of the victim (the victim) when they committed the crimes, it is possible to provide the person in charge of forced labor service (Elk) of him .

Drafting the derived conjugations in the Akkadian language, a comparative study with the Arabic languages

This research identified the date of each of the three layers discovered in the building of the city of pikasi (Tell Abu Antek) located 50 km south of Babylon after the varied opinions on the determination of those dates. We basely depended on the review of all the dated texts which discovered during the second and third seasons and install their provenance, especially those discovered in the third layer, which was entirely burnt. As a result of that review, we were able to determine the exact date of the three layers, which were as follows: The third layer (the oldest) dating back to the first eight years of the reign of Samsu - iluna king of Babylon and destroyed by fire after the revolution of Rim-sin II , the second layer (with its two floors) starting from the year 10th of the reign of Samsu – iluna until the end of his reign, and the first layer from the beginning of the reign of Abi – eshukh until year 23 of his reign.

The bitanu wing of the palace of the Assyrian royal palace occupies a special position with the king ,and it is considered that the workers are women only ,as well as men The most important workers of the harem wings is the šakintu who played an important role in managing this wing, and responsible for the movement of the servant and their proper functioning.

The Mosque occupies an important and effective aspect in the realm of the Islamic city. generally as to the effective role it plays in the Islamic city; moreover the important role played by the prayer and its functions as to the religious and social life of society; besides the administrative organizations; also by virtue of customs and traditions. The Mosque became a starting off for all that relying on the heavenly law; then rules and values of the society. The Mosque played its role starting off from the center of the city until the quarters dwelled by the population became independent; whereas each one taking a Mosque performing those functions. This what was represented by the cities to the north of Iraq and the subject matter which considered an exemplar for the cities on which those conditions applied to them with corresponding other neighboring cities which characterized by the specialty of analogy in the environmental and constructional factors, ,moreover the other impacts which relate to the planning nature of the city as to the rates and directions of the architectural extension inside the wall, topography of the location, and square available; besides the social factors which affected on limitation the form and design of the architectural elements. All that had the effect on appearing the form in which these mosques ended and forming the architectural personality. The research concentrated on the planning of the mosques in that area which took its origins from the first mosques which were represented by the prophet's mosque and clarifying its essence. But as to the architecture; the environment had its clear effect on moving into the closed design which prevailed since the fifth century A. H. nearly. Thus to find the guaranteeing handlings of this kind of building, using each element to adapt the environmental differences, constructional function, and kind of each material used in building.

Archaeological sites and their Patterns in Plain Makhmur

This research deals with the archaeological sites and their patterns, whether they are cities or important centers or small sites and their distribution in the large lands in the Makhmur Valley, and the sequencing of settlements there since the earliest ages, specifically the role of Hassuna and its continuation until after the Islamic conquests. The research also included the periods of prosperity and florish, the cultural centers and the factors that led to its prosperity and the subsequent periods that witnessed the diminish that hit parts of the area Under research, as well as the historical periods that witnessed intensive settlement and other periods in which the settlement gradually turn into a shrinking welded.

The Artistic Style of the Arabic Calligraphy in Mosul : An Artistic Study

This research aims at finding out the ways and the realistic style that can be used by the calligraphers in Mosul . besides it gives the reason which urges those calligraphers  to prefer this kind of calligraphy and refuses the other .It shows also the dependent way for the Arabic Calligraphy in Mosul . This research tackles five Calligraphers who stand for one of the most important periods in the history of the contemporary period in Mosul, starting from Yousif Thanoon ( calligraphic realism in Mosul in 1960s up to date . The research also shows their own biographies and talks about a descriptive and analytic study throughout two pieces of their works each to see the style every one uses .
The research depends entirely upon personal debates and meetings with each one , beside, the most important reasons as how to explain the poem of Ibn AL-Bawab in the science of making up a book for Ibn AL-Bassees,the Arabic Calligraphy of the Abbaside Age in Iraq by Suhaila AL-Juburi, the Message of Ibn Al-Muqalah in Writing and so on.
Finally , the research finds out certain outcomes that can be found and seen in the conclusion.